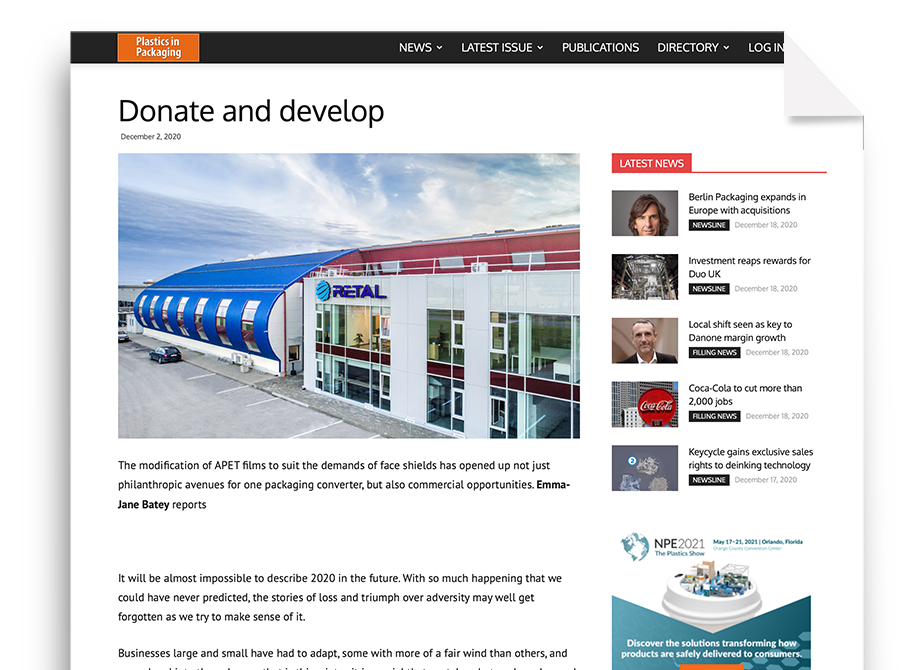 The modification of APET films to suit the demands of face shields has opened up not just philanthropic avenues for one packaging converter, but also commercial opportunities. Emma-Jane Batey reports

It will be almost impossible to describe 2020 in the future. With so much happening that we could have never predicted, the stories of loss and triumph over adversity may well get forgotten as we try to make sense of it.

Businesses large and small have had to adapt, some with more of a fair wind than others, and as we head into the unknown that is this winter, it is crucial that we take what we have learned and make the best of it.

During the first lockdown in spring, global plastics packaging manufacturer Retal responded to an online shout-out from a non-profit organisation that needed face shields for healthcare workers in Lithuania. The Retal Baltic Films team made the necessary adjustments to the plant’s equipment in order to produce transparent, fog-free APET films that are thicker than the company’s usual food-grade films.

As ‘essential’ manufacturing has been able to continue throughout the lockdown, the company was able to donate the required volume of these particular APET films for the production of more than 70,000 masks. These were requested by Robotikos Mokykla, a non-profit that provides technical education for children, and was spearheading the organisation of creating PPE masks for people in at-risk jobs during the initial phase of coronavirus.

Following the success of this volunteer project, the Retal Baltic Films team was keen to continue with the production of this specific APET film, even though the demand for face shields decreased in urgency as the supply of PPE became more reliable.

Violeta Ruseka, Retal Baltic Films’ APET films sales manager, explains: “We all know that 2020 has been a huge challenge, but the challenge to amend part of our additional production capacity to produce these thicker APET films for face shields was a welcome one. In March and April we found they were in great demand and we created an internal platform so that medical professionals could order them directly; it’s quite probable that the majority of face shields used in Lithuania until May were made from Retal Baltic Films APET film.”

While demand for this film for face shield applications dropped slightly after June, the company found that other applications were fast creating additional needs, in particular for the temporary, transparent hanging screens that have been quickly installed at many shops, coffee bars, and administrative offices with public access.

Ruseka adds: “This APET film is around 5mm thicker than the film used for face shields, but other than that it has the same anti-fog, no haze qualities and can be easily cut to whatever size and shape is required.”

Now that the company has finalised the technical parameters for its various APET film thicknesses, it is able to quickly adjust production according to its customers’ needs, both in terms of donating product for non-profit organisations and selling in quantity for commercial customers.

“This is one of two new cooperations that we have established since June and we are seeing new orders come in in smaller quantities too,” admits Ruseka.

Read on Plastics in Packaging