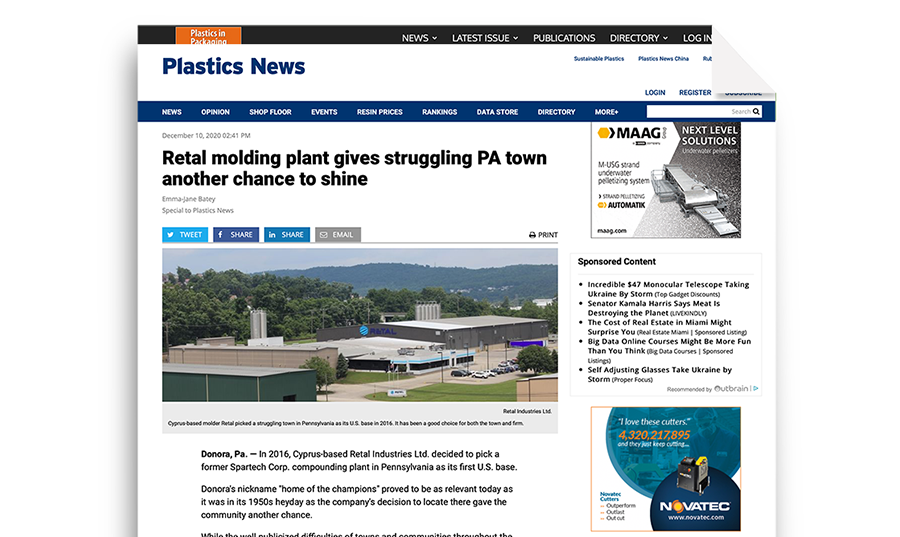 Donora, Pa. — In 2016, Cyprus-based Retal Industries Ltd. decided to pick a former Spartech Corp. compounding plant in Pennsylvania as its first U.S. base.

Donora's nickname "home of the champions" proved to be as relevant today as it was in its 1950s heyday as the company's decision to locate there gave the community another chance.

While the well publicized difficulties of towns and communities throughout the rust belt are also true, the clear characteristics of hard work, loyalty and positivity shine through.

This undeniable spirit was one of the main pulls for global plastic packaging manufacturer Retal Industries decision to build in Donora, with the process of creating its factory and ensuring it quickly became successfully active gaining invaluable support from the local community.

Elizabeth Giecek, human resources manager at Retal PA LLC, joined the company in May 2017, and has a close understanding of how the community support allowed the business to find a happy home.

"I'm originally from about 35 minutes away from Donora, in Washington, and I've always been interested in the history of the valley. It used to be that each town had its own mill and there were plenty of good jobs for regular people, but as the mills started pulling out it got harder," she said.

"Steel production started to decline from the early 1980s, and it was also that pollution became more of an issue throughout the valley. So the tone changed; people and families needed to leave to find jobs, and young people graduated and left," she said.

But while the tone of Donora and its neighboring towns changed, that local pride and expectation of hard work remained.

You are welcome to download the report without answering these questions, but we would appreciate your information if possible for our internal analytics. Thank you.

You are welcome to download the report without answering these questions, but we would appreciate your information if possible for our internal analytics. Thank you.